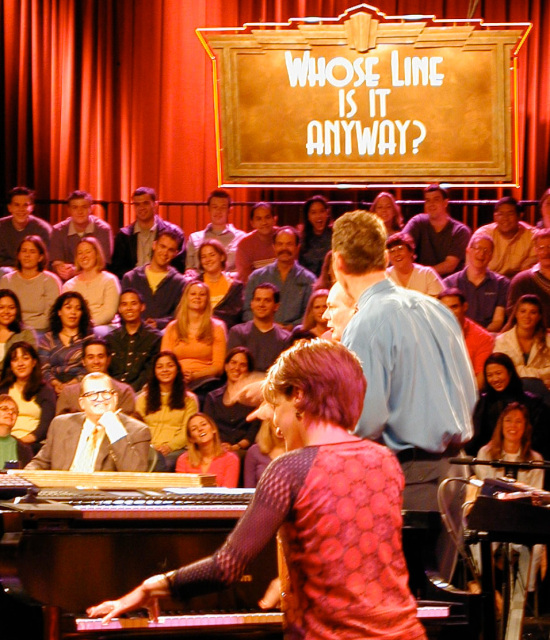 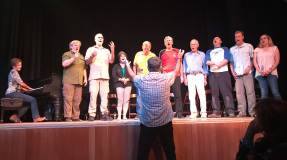 If you’ve always wondered, “How do they improvise the songs on “Whose Line IsIt Anyway”, then join “Whose Line” musical director Laura Hall, and veteran Second City improviser Rick Hall, for this fun, lively workshop. Laura & Rick have led music improv workshops all over the world, creating a supportive, playful environment with lots of opportunities for participants to try out this exciting form of improv. Even if you've never done improv before, Laura & Rick will guide you with fun games and exercises. You'll be belting out your own improvised songs before you know it!

Laura Hall is best known as the improvisational pianist and Musical Director on the hit TV show, “Whose Line is it Anyway”, which ran for nine years on ABC, with Drew Carey hosting. After a hiatus the show is currently in its sixth season on the CW Network, with Aisha Tyler hosting. In December 2018, Laura played with the Whose Line Christmas Show at Royal Albert Hall in London, celebrating the 30th anniversary of the British & American versions of the show.

Laura has toured the country with “Drew Carey and the Improv All Stars”, and played with many other improv groups around the country, including iO Chicago and iO West, The Groundlings, Theatresports, The Improv Institute and “Opening Night: The Improvised Musical!” While at The Second City, Laura was Musical Director and Composer for the Jeff Award winning E.T.C. revue, “Channel This!” She composed original musicals with The Annoyance Theater and Theater-A-Go-Go, including “Patty, Patty, Bang! Bang!” which won an L.A. Weekly award for Best New Musical.

Laura has written music for several indie films, including “Slice of Pie”, written by and starring her husband. She scored two award winning documentaries about the holocaust, “Swimming in Auschwitz” and “After Auschwitz”, as well as romantic comedies, “Anatomy of a Breakup” and “Look at Me”, and “The Wheels on the Bus” video series, starring Roger Daltrey as an 8 ft dragon.

Rick Hall was a founding member of Chicago’s Improv Institute. At The Second City he created and performed in two Main Stage shows, “John Paul Sartre & Ringo” and “Catch 27”. Rick continues to use his improv skills as a host/presenter at meetings and corporate events, as well as at auditions and on television shows and commercials.

Rick was a series regular on the improv-based TV show “The Factory”. He played Agent Johnson on 28 episodes of the hit Disney show, “KC Undercover”. He’s been on many other television shows including “NCIS”, “Curb Your Enthusiasm”, “24”, “Key & Peele”, “The Middle” and “Seinfeld”. He's been seen in commercials for AT&T, Centrum, Sabra Hummus and many more.

Rick loves writing and telling stories. In November 2018 he headlined at “The Reboot: Storytelling Re-Imagined” on the Central Coast. In his one man show, “Pigboy”, he tells stories about growing up on a farm in Central Illinois. The show was chosen for the HBO Comedy Arts Festival in Aspen, and enjoyed successful runs in L.A., Chicago, and across the Midwest. Rick has recorded a cd of several of his stories and turned one of them, “Slice of Pie”, into a short film, which has won numerous awards on the film festival circuit.

To find out more about Laura, visit www.laurahall.com

To find out more about Rick, visit www.therickhall.com